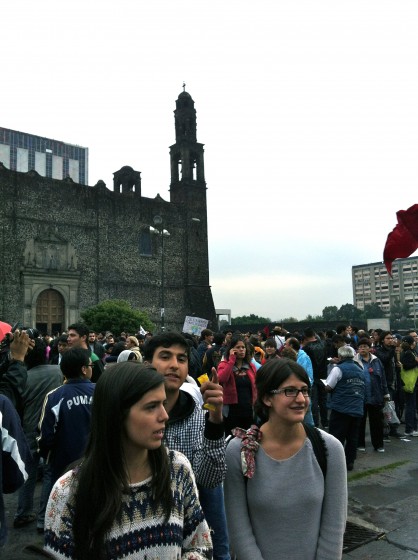 We’ve been here just forty-eight hours. But given the intensity of the historical moment in that intensest of cities, México D.F., it feels like much, much longer.

We just returned from the #132 student movement march — we made it a family outing with my partner Angela and our daughters Ruby and Lucía. It began after a classic chilango thundershower caught us at an outdoor tianguis, the water weighing down the tarp above us, lightning crashing down terrifcally close, traffic snarled on Insurgentes… an apt metaphor for the eve of among the most important presidential elections in Mexican history.

The country is holding its collective breath. While most mainstream polls have consistently shown the PRI’s Enrique Peña Nieto with a comfortable lead, some independent and internal campaign surveys show the vote much tighter between Peña Nieto and his main rival, the leftist coalition candidate Andrés Manuel López Obrador.

In my own very unscientific, subjective polling since arriving at the Mexico City International Airport (just 72 hours after a traumatizing narco-related shootout at Terminal 2 left three Federal Police dead), just about everyone I’ve talked to tells me: no sé… quién sabe… a saber… ni idea…

That uncertainty is not necessarily a bad thing. Much of it probably has to do with the student movement shaking things up, and allowing people to believe in political possibility again. Neither of the two leading candidates communicate the kind of scintillating hope that Obama summoned in 2008. The excitement that exists is coming from the students, whose movement began at the upper-crust Catholic Universidad Iberoamericana but has since spread to dozens of campuses public and private across the country. They are young, anarchic, charismatic, having fun, poking fun, raising up old red-and-black banners and conjuring new ones along the way.

Today’s march was billed as a silent procession to the Zócalo, and, as typical of #132’s core mission, antipartidista — beyond political parties. The cohort is largely leftist of course, and AMLO stands to gain the most from their agitation, but the antipartidista rhetoric is substantive. Like poet and Movement for Justice with Peace and Dignity leader Javier Sicilia taking an equal-opportunity approach in roasting the four top presidential contenders a month ago, part of the student movement’s mystique is that it is dreaming beyond the borders of normative political discourse and evoking another country. In this it is organically tied to Occupy in the U.S., to the indignados in Spain, to the original Arab Spring, to the global uprising of 2011-12 which, I’m convinced, history will remember as a watershed moment not unlike 1968.

The march was anything but silent. From the convergence at La Plaza de las Tres Culturas in Tlatelolco — a place steeped in the narrative of ’68, the bloody repression of that generation’s student hope — the slogans bounced off the walls of the massive apartment buildings close by. At first I was annoyed by the boisterousness, since I’ve been working a lot with the idea and practice of silence recently. But then my daughter Ruby said “It’s a fiesta!” And of course, it was. A festival of youth.

No matter what happens tomorrow, #132 has given back to Mexico — I am speaking of the place within and beyond its borders, its national and transnational selves — its imagination precisely at the moment when it needs it most.

2 Responses to To Mexico with #YoSoy132