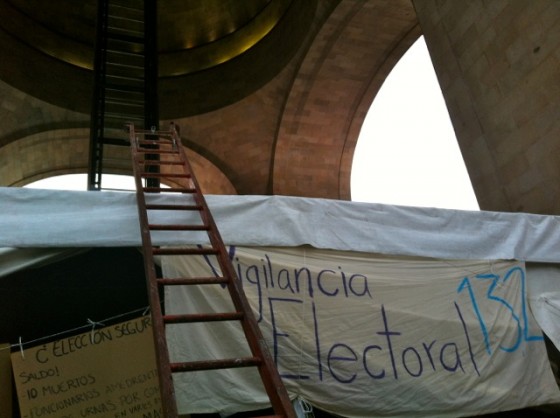 I opened my last post by saying that the previous forty-eight hours had seemed an eternity — marked by a major protest march and most of all anticipation, everyone girding themselves for a political and existential typhoon.

Well, the last twenty-four hours were much longer than that.

By so many measures the 2012 election in Mexico was improbable, searing, insulting, strange, violent… and at the same time it was this political coyuntura (my favorite poly-sci term in Spanish, which has no perfect translation to English: juncture, moment… but a critical one) that gave rise to the boisterously hopeful student movement #YoSoy132.

With the ley seca in effect—48 hours of public abstemiousness—la capital, famous to itself and to generations of foreign bohemians as a world-class party town, retreated indoors to wait for voting day and then the excruciating wait for election results (all the while drinking from private stashes of alcohol; my local supermarket’s liquor section was jammed Friday night as the ban approached).

On Sunday there were interminable lines of voters at the casillas especiales, polling places set up for people caught outside the district they were registered in on election day (not because of laziness, but because the process of changing your registration here is a lengthy bureaucratic exercise). One of our friends showed up at a casilla especial at 8 AM sharp and said there was already a line of hundreds who were told there were only 750 ballots. She never voted.

Then came a long, lugubrious rain. Not a typical chilango monsoon chubasco, but a cold, steady rain that my daughters Ruby and Lucía delighted in; they were wearing sandals because the day began bright and warm and they splashed in every puddle they could.

In the afternoon we attended a children’s play at UNAM, the famed national public university, Latin America’s biggest, and then watched the final golazos of the European Cup match at an Argentine restaurant (Mexico City does bife very well, owing to its  large Argentine population, a good part of which arrived during the Dirty War), and later ran into the de rigeur band of España fans dancing their victory jig at La Cibeles, the fantastic replica of the famed fountain in Spain.

All very pleasant. And throughout it all a simmering tension.

We waited at our rented house in Colonia Roma, eyes straining on Twitter feeds and FB posts and switching between Mexican TV networks Televisa (the focus of #YoSoy132’s rage at media manipulation in favor of Enrique Peña Nieto, where I could not reconcile myself with the presence of the great melancholic leftist theorist Roger Bartra as commentator) and the more liberal Milenio.

The next several hours were a roller coaster, with the preliminary results showing AMLO steadily gaining even as JVM was conceding and Peña Nieto was readying his victory speech. At one point, it appeared that AMLO was within reach of tying for the lead.

But the PRI, that old familiar party of Orwellian clichés and oxymorons (beginning with its name, the Institutional Revolutionary Party), began its streamroller of a victory march. It didn’t matter that AMLO and Peña Nieto took to the airwaves at the same time, AMLO steadfastly refusing to concede and EPN declaring it all over with one of those Orwellian clichés: No hay regreso al pasado! There is no return to the past, although that is exactly what seems to be happening. At least as far as the Instituto Federal Electoral, the PRI, Televisa, probably a good part of the narco world and perhaps even the Obama Administration is concerned.

But the other Mexicos remain. The much-reduced Mexico of the PAN (which held on to only a couple of governorships, but retained a strong vote among Mexicans abroad). The battered traditional Left of AMLO and his followers, which must decide how far to take their charge that the election was rigged (AMLO’s months of protest after his narrow loss to Felipe Calderón in 2006 fatigued the nation).

And then there is el México nuevo, that fresh-faced, against-all-odds and in-spite-of-all-the-darkness México: the students. Not much happened over night, but by Monday afternoon the kids were in the streets. Hard to talk about numbers and hard to predict how much momentum the #YoSoy132 movement will generate as the PRI tries to consolidate power, but in a time-honored chilango political tradition they blocked traffic at Insurgentes and Paseo de la Reforma, the city’s major arteries. I was stuck on a stationary Metrobus for nearly an hour and was so close to a panic attack I was within minutes of pulling the emergency switch.

The doors opened suddenly and I beheld one of the strangest sights I’ve ever seen in Mexico City: hundreds of people pouring out of Metrobuses and walking north on Insurgentes. They were not all radical students, of course. Most of them were frustrated commuters trying to get home. But here and there were kids in pork pie hats or with heads shaved or with Converse sneakers or with backpacks or streaks of blue in their hair: the very motley cohort of the new student movement.

Their destination was the Monumento de la Revolución, for seven decades one of the PRI’s favorite icons, the massive, rather squat structure made of a cupola atop four tall arches. It has Art Deco flourishes but there is something rather brutal about it: it imposes itself with power rather than beauty. Not unlike the PRI.

#YoSoy132 shows much brilliance in its symbolic choices. They’ve now pitched tents, Occupy-style, under the great dome of power, youth rising up with a whole other kind of power.

As a drizzly dusk fell upon the city, the students and their retinue of street vendors grew by the minute. The General Assembly began, not with a human megaphone but an actual one, and the propuestas, the proposals, came one after another. Organize every neighborhood! Stop drinking alcohol and smoking pot, the media will focus on that! Let’s help the country document every electoral irregularity! We’ve had enough of big media, let’s make our own media!

I made my way back to our house on the Metro (underground this time), and encountered spontaneous rallies at two stations — Balderas and Pino-Suárez, several dozen students chanting their new slogan: 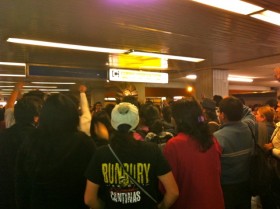 Most of the evening I was surrounded by brown skin and black hair: middle and working class kids. Didn’t see many salt-and-pepper (leaning towards salt) goatees like mine in the crowds. All the better. We all know the Revolution is brought by the young to topple the old structures.

4 Responses to The Revolution Starts Now