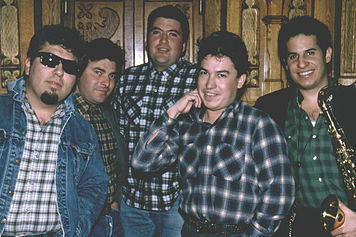 Los Lobos: back in the day

1984… and the Grammy for best “Mexican-American Performance” goes to… Los Lobos, virtuosos of rock and ranchera and everything in-inbetween, for “Anselma,” a norteña staple that the band performed at break-neck — shall we say punk? — speed. A few months later I saw them play the song live at Lincoln Park on Cinco de Mayo weekend. If memory serves, Los Lobos had also just completed their first European tour. The sons of East L.A. (Garfield High) had made it big. But what struck me as they took the stage on that warm spring afternoon was how the recognition from beyond the barrio felt like it belonged to the barrio itself. Getting a nod from the mainstream can be interpreted as “selling out” by o.g. fans, but there was a raucous celebration in Lincoln Park that day. It felt like the Grammy belonged to all of us.

Flash forward to the 2013 edition of the Grammys… and the award for best “Latin rock, urban or alternative” album goes to… Quetzal, for “Imaginaries,” an album that is celebratory and dead serious, nuanced and multi-layered, its tropical grooves meeting r&b and rock edge and jazzy melodic play.

The night before the award ceremony, Quetzal and some of their friends played a show at the Breed Street Shul, a synagogue in Boyle Heights that recalls the neighborhood’s deep Jewish roots. I spoke to Quetzal Flores, the band’s guitarist, a few days before that show—he just so happens to be producing the record that I am working on at the moment (!). He talked about the Grammy nomination and how he wanted it “belong to the whole community.”

I missed the fandango at the shul (such is the life bi-city commuter, always missing out on something cool in one place or the other). But here’s video proof of its significance…

The next day the award was announced and social media went electric with the news: a virtual version of the shared pride I felt at Lincoln Park almost thirty years ago. Sadly, there haven’t been many other such occasions to celebrate L.A.’s Chicano bands (Quetzal would chafe at “Mexican-American,” and all the other awkward Grammy nomenclature that categorizes “Latin”… for several years there was actually a category for best “Mexican/Mexican-American Album”). Ozomatli did win a Grammy in the 2000s. And my parents were happy all those times Vicki Carr won.

But just think how much musical talent has come out of the greater Eastside over the decades — from the mysterious L’il Julian Herrera, the Hungarian Jewish-Chicano rock ‘n’ roller of  1950s Boyle Heights, to Rubén Guevara, the “Aztec God of Funk” and one-time collaborator to Frank Zappa, to new wave provocateurs Los Illegals, to The Bags, fronted by punk diva (and now author) Alice Bag…to the latest generation of jarana-picking neo-folkies-with-a-pomo-twist (La Marisoul, Las Cafeteras, et. al.) closing the circle that Ritchie Valens began to trace by taking “La Bamba” electric all those years ago.