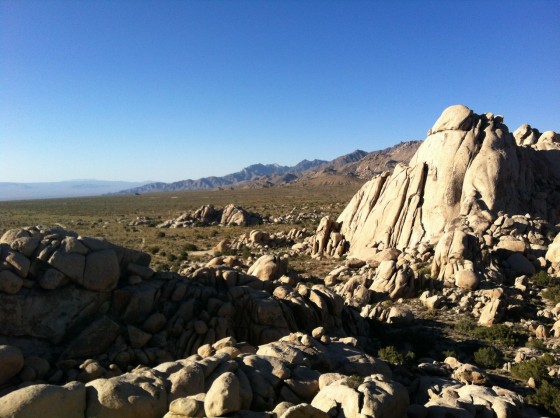 I am glad to inaugurate this website and offer my first post here, something I’d thought of doing for a long time  as I watched the analog world I grew up in steadily evaporate into the ether of the virtual realm.

The occasion of this “launch” is tied to another debut, that of my new book, DESERT AMERICA, whose official publication date is August 7. The book tells the story of over a decade of sojourning in the American desert West and borderlands, from living in a small northern New Mexican village wracked by poverty and addiction to touring high-end art colonies during the boom years, from visiting the Tohono O’Odham Nation lands along the border haunted by deadly migrant passage to considering the many, often contradictory ways the desert of Southwestern America and northern Mexico are imagined and represented in art and media.

I first thought about writing a book on the desert shortly after I moved into a small house on the edge of what I called the “100 mile nothing” in 29 Palms (there was a sign on Highway 62 nearby that read “Next Services 100 Miles”). I told everybody that it was going to be a book about water. Not just about water rights and sustainability — a huge desert story, of course, all the more so given the rapid, extensive development in the region — but also about other kinds of water rights… the right of a migrant to have enough water to survive a journey across the Sonoran desert in Arizona, for example.

I arrived in the desert in bad shape in both body and spirit. One of the ways I nursed myself back to health was by taking daily walks with my late dog Bear, the noblest Akita mix that ever lived and who I rescued from the local animal shelter, which was filled with pets hastily dropped off by redeployed Marine families (29 Palms is tethered to the largest Marine Corps training facility in the U.S.). I like to say that Bear walked me, since he was in much better shape, in body and spirit, than I was. (For my personal soundtrack of this time in my life, take a listen to this song I recorded at Fred Drake’s Rancho de la Luna in Joshua Tree, a beloved personality and place featured in a chapter of the book being serialized at KCET’s Artbound site.) 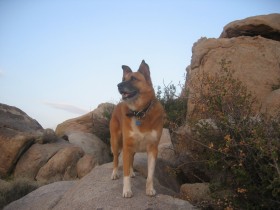 Over many years, in anything but a linear process, I got my life back together. Even from early on I knew that my journey to the desert was a matter of survival. And although I was a kind of decadent materialist back then (an over-indulgent bohemian with Marxist leanings), I also knew that by going to the desert I was following an ancient mystical path.

I am still on that path.

I just returned from the desert, actually. It was a quick two-day solo trip. I spent  the first night at an old favorite, the Twentynine Palms Inn, a fabulous place of old adobe cabins set amid an authentic oasis (the Oasis of Mara, which has been watering people and animals for millennia), and the next night in a rustic camping spot in the Mojave National Preserve far from the nearest spigot, or natural spring for that matter.

It was well over 100 degrees when I arrived in the Granite Mountains to greet the Summer Solstice. I wondered how many others would make the trek out there. None. I was completely alone. Which is what I’d both wished for and dreaded. I busied myself with pitching camp as the sun fell behind the jumble of stone surrounding me — innumerable boulders of distinct shapes and sizes forming natural niches and sandy bowls, crevasses, and easy and sometimes daunting ladders for hiking — the grainy, dusty yellow rock dabbed with the green of juniper and piñon. The boulders are great rain collectors, offering plants and animals water in a way the flats cannot.

My camp ready, I hiked in the waning light of the longest day of the year. I climbed the boulders, leapt here, hesitated there, estimated risk of death or disfigurement, tried to memorize my steps to avoid pitching off a precipice on my way back to camp, kept climbing higher and thinking to myself: if you do break a leg you’re going to be in real trouble, just like 127 Hours, dude… and other such catastrophic scenarios. But at a certain point most of the thoughts fell away. My senses were consumed by the land, its immensity and intimacy, the mountains fading into the horizon and the granules of granite scratching my hands.

I was approaching a place beyond language. Mostly, I was a body on the land. But I was not in a place beyond history. I knew there were abandoned mine shafts in the area that represented the old human order, and a debate about whether to open up the desert to wind farms and solar arrays, representing the new one. Now and again images flashed through my mind, of other journeys I’d undertaken in different deserts, and of the journeys of others that I’d written about, especially the migrants in their odyssey across the burning plains. The tension between these spaces — the material desert and the metaphysical one, the desert of spirit and the desert of the flesh — is at the heart of my new book. How does one reconcile the desert of the drug war with the one of rock climbing, the desert of the desperate migrant with the one of an outsider American art colony (such as the village of Joshua Tree, where I  lived off and on for several years), the desert of Arizona’s crude neo-nativist politics with the one that the early Christian monks retreated into searching for the spirit beyond the flesh?

I returned to camp and spent the long twilight occupying myself with the many little tasks of living in a house without walls or plumbing or electricity or appliances (and with an iPhone that registered “No Signal”), anticipating the hushed darkness to come. When it came so did the demons. I had a good fire and my Coleman lantern going full blast, but this was not enough to stop me from waxing paranoid. Snakes! Some Charles Manson-like psychopath about to leap from the shadows! What if I have a heart attack? I will die alone. I’ve got to get the hell out of here!

Are we having fun yet?

Then came the stars, coruscating stars. The Milky Way like a mist issuing from the boulders. There was no moonlight and no city-light, and yet I could see the desert nocturne around me very well by starlight alone. Suddenly the stillness was not the absence of life, but its very presence. In that delicate balance of mindfulness and openness to both the world outside and the world within, to the constant mutability of things which adds up to something immutable, I sat in the middle of the universe and at its farthest edge. As long as I kept gazing at the stars, the demons retreated. The heavens were my cradle and I slept through the night until twilight, just after 5 a.m., when the daytime desert world came buzzing back to life.

My pilgrimage brought me peace, even as it reminded me of the many political deserts where the dignity and integrity of bodies and spirits are at stake — not to mention the entire biome. In the silence there were demons, and the swell of life itself.

I’ll be going back soon.

But first — to Mexico City, where I’ll be blogging during the momentous presidential elections there — one of those political deserts…